By Dan McGrath on August 22, 2014 in Environmentalism, Solar Power 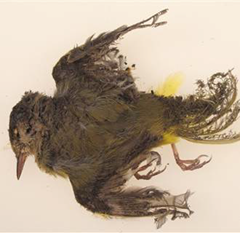 What spans 1,600 hectares, cost $2.2 billion to build, and potentially fries hundreds of thousands of birds per year? The new BrightSource solar power plant in California’s Mojave Dessert. The plant, which uses some 350,000 garage-door-sized mirrors to focus sunlight on three boiler towers, also acts as a death ray, instantly igniting and killing any wildlife that happen to fly through the intense beam of light. Wildlife officials are concerned that this concentrated solar power plant, and others like it, could turn into “mega-trap” that decimates the ecosystem — first attracting insects, and then attracting birds that eat insects. BrightSource, in the mean time, is forging ahead with an even larger solar power plant that officials say could kill four times as many birds. Won’t somebody stop these not-so-green nature-killing maniacs?

Most of the world’s solar power is generated via photovoltaic cells — wafers of silicon sandwiched between sheets of glass that create electricity directly when struck by sunlight. Another method is concentrated solar power (alternatively called “solar thermal power”), which uses a huge number of mirrors to focus sunlight on a tower in the middle. The tower contains some kind of fluid (super-heated water, molten salt) that in turn creates electricity via a conventional steam turbine. For a while, concentrated solar was seen as the future of solar power, but photovoltaic cells are now back in vogue after large price cuts over the last few years.

Read the rest at Extreme Tech.