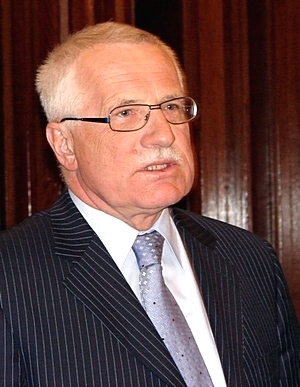 Here’s a copy the remarks made by VÃ¡clav Klaus, president of the Czech Republic, delivered at the 2008 International Conference on Climate Change.

I would like first of all to thank the organizers of this important conference for making it possible and also for inviting one politically incorrect politician from Central Europe to come and speak here. This meeting will undoubtedly make a significant contribution to the moving away from the irrational climate alarmism to the much needed climate realism.

I know it is difficult to say anything interesting after two days of speeches and discussions here. If I am not wrong, I am the only speaker from a former communist country and I have to use this as a comparative — paradoxically — advantage. Each one of us has his or her experiences, prejudices and preferences. The ones that I have are — quite inevitably — connected with the fact that I have spent most of my life under the communist regime. A week ago, I gave a speech at an official gathering at the Prague Castle commemorating the 60th anniversary of the 1948 communist putsch in the former Czechoslovakia. One of the arguments of my speech there, quoted in all the leading newspapers in the country the next morning, went as follows: “Future dangers will not come from the same source. The ideology will be different. Its essence will, nevertheless, be identical — the attractive, pathetic, at first sight noble idea that transcends the individual in the name of the common good, and the enormous self-confidence on the side of its proponents about their right to sacrifice the man and his freedom in order to make this idea reality.” What I had in mind was, of course, environmentalism and its currently strongest version, climate alarmism.

This fear of mine is the driving force behind my active involvement in the Climate Change Debate and behind my being the only head of state who in September 2007 at the UN Climate Change Conference, only a few blocks away from here, openly and explicitly challenged the current global warming hysteria. My central argument was — in a condensed form — formulated in the subtitle of my recently published book devoted to this topic which asks: “What is Endangered: Climate or Freedom?” My answer is clear and resolute: “it is our freedom.” I may also add “and our prosperity.”

What frustrates me is the feeling that everything has already been said and published, that all rational arguments have been used, yet it still does not help. Global warming alarmism is marching on. We have to therefore concentrate (here and elsewhere) not only on adding new arguments to the already existing ones, but also on the winning of additional supporters of our views. The insurmountable problem as I see it lies in the political populism of its exponents and in their unwillingness to listen to arguments. They — in spite of their public roles — maximize their own private utility function where utility is not any public good but their own private good — power, prestige, carrier, income, etc. It is difficult to motivate them differently. The only way out is to make the domain of their power over our lives much more limited. But this will be a different discussion.

We have to repeatedly deal with the simple questions that have been many times discussed here and elsewhere:

1) Is there a statistically significant global warming?

3) If we decide to stop it, is there anything a man can do about it?

4) Should an eventual moderate temperature increase bother us?

One Response to From Climate Alarmism to Climate Realism