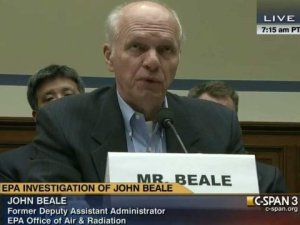 The EPA’s highest-paid employee and a leading expert on climate change was sentenced to 32 months in federal prison Wednesday for lying to his bosses and saying he was a CIA spy working in Pakistan so he could avoid doing his real job.

John C. Beale’s crimes were “inexplicable” and “unbelievably egregious,” said Judge Ellen Huvelle in imposing the sentence in a Washington. D.C. federal court. Beale has also agreed to pay $1.3 million in restitution and forfeiture to the government.

Beale said he was ashamed of his lies about working for the CIA, a ruse that, according to court records, began in 2000 and continued until early this year.

“Why did I do this? Greed – simple greed – and I’m ashamed of that greed,” Beale told the court. He also said it was possible that he got a “rush” and a “sense of excitement” by telling people he was worked for the CIA. “It was something like an addiction,” he said.

Read the rest at The Weather Channel.

Writer, Activist, Pilot, Communications Expert, Jack of all Trades. Websites: https://www.DanMcGrath.net | https://www.DanandTina.net
View all posts by Dan McGrath →
Global Warming will kill us all, warns Common Core-Aligned Homework
Global warming scientists forced to admit defeat… because of too much ice: Stranded Antarctic ship's crew will be rescued by helicopter