By Dan McGrath on December 16, 2009 in Copenhagen Treaty, Extremists 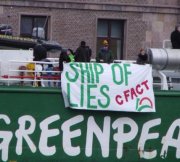 Global warming skeptics from CFACT yesterday pulled off an international climate caper using GPS triangulation from Greenpeace’s own on-board camera photos to locate and sail up long-side of the infamous Greenpeace vessel, Rainbow Warrior. Then in Greenpeace-like fashion, the CFACT activists unfurled a banner reading “Propaganda Warrior” which underscored how the radical green groupâ€™s policies and agenda are based on myths, lies, and exaggerations.

Earlier in the day the activists daringly boarded Greenpeace’s Arctic Sunrise with neither stealth nor force, but by baffling the crew with doughnuts, and unfurled a banner that read â€œShip of Liesâ€ off the starboard side.

â€œGreenpeace has been using these kinds of tactics for decades, and now they can find out what itâ€™s like to have a little taste of their own medicine, â€œ said CFACT executive director Craig Rucker who masterminded the operation.Â

CFACT unfurled the banners for two reasons, CFACT president David Rothbard explained. â€œGreenpeace ships, like the Rainbow Warrior and Arctic Sunrise, have become global symbols for radical environmentalism, and we wanted to call attention to the harm these groups are causing.Â  And second, it seemed appropriate to use one of Greenpeaceâ€™s favorite tactics to make this point.â€

Greenpeace protesters frequently hang banners from factories and office buildings, paint slogans on smokestacks, and employ other publicity stunts. Some are relatively harmless, but others reflect a willingness to lie or even destroy property to make a point.

In 1995, Greenpeace launched a $2-million public relations campaign against Shell Oil, claiming the company was planning to dump tons of oil and toxic waste in the ocean by sinking its Brent Spar platform as an artificial reef. It was a full year before the group issued a written apology, admitting it knew all along that there had been no oil or chemical wastes on the platform.

Greenpeace has frequently destroyed bio-engineered crops, wiping out millions of dollars in research efforts designed to develop food plants that are more nutritious, withstand floods and droughts better, and resist insect infestations without the need for chemical pesticides. It has also waged an unrelenting campaign against insecticides and insect repellants that could prevent malaria, a vicious disease that infects 500 million people a year, kills over 1 million and leaves millions more with permanent brain damage.

Read the rest of this story at CFACT.