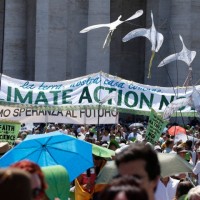 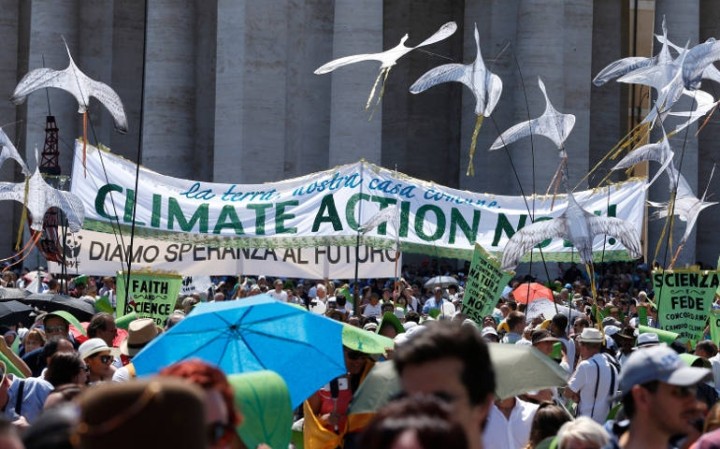 A banner calling attention to climate change is seen in St. Peter’s Square at the Vatican June 28. Some 1,500 people marched to the Vatican in support of Pope Francis’ recent encyclical on the environment. (CNS photo/Paul Haring)

The world’s bishops have a clear message for world leaders set, in barely a month, to enter the latest and perhaps most significant round of international climate negotiations: Get the deal done in Paris.

In Rome on Monday, the heads of six continental bishops’ conferences, along with leaders of national conferences in the United States and Canada and of the Catholic patriarchs of the Orient, made the collective call — “on our own behalf and on behalf of the people for whom we care” — to the negotiating parties who are set to arrive Nov. 30 in Paris for the annual United Nations climate change conference, formally known as the 21st Conference of the Parties (COP 21).

“We join the Holy Father in pleading for a major break-through in Paris, for a comprehensive and transformational agreement supported by all based on principles of solidarity, justice and participation,” the bishops said in their appeal, which drew heavily from Pope Francis’ encyclical, “Laudato Si’, on Care for Our Common Home.”