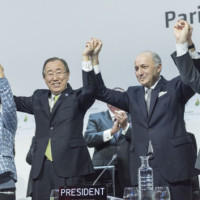 By ManBearPigHunter on December 14, 2015 in COP21
But Obama still wants to send US energy use and living standards backward
CFACT.org
Paris climate talks this week descended into madcap all-night negotiations, as delegates desperately tried to salvage some kind of agreement beyond empty promises to do something sometime about what President Obama insists is the gravest threat to our planet, national security and future generations.

He gets far more energized about slashing energy use than about Islamist terrorism, even after the Paris and San Bernardino butchery. Determined for once to lead from upfront, he took a 500-person greenhouse gas-spewing entourage to the City of Light, to call for preventing increasing droughts, floods, storms, island-swallowing rising acidic ocean levels and other disasters conjured up by alarmist computer models.

Legally binding carbon dioxide emission targets were too contentious to pursue. So was modifying the concept of “differentiated responsibilities.” It holds that countries that historically caused the recent atmospheric carbon dioxide build-up must lead in cutting their emissions, while helping developing countries eventually do likewise, by pouring trillions of dollars in cash and free technology into the Green Climate Fund for supposed climate change adaptation, mitigation and compensation. Developing countries had insisted on that massive wealth redistribution as their price for signing any binding document.

View all posts by ManBearPigHunter →
Why Bother? John Kerry Admits American CO2 Cuts Would Be Pointless
Why I like Obama’s Oil Tax With Just A Few Tweaks