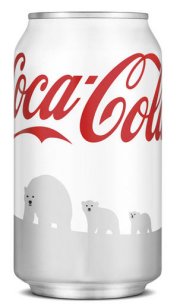 For years Coca-Cola has given millions of dollars to eco-extreme group World Wildlife Fund, whose alarmism and perpetration of falsehoods are unmatched among its cohorts in climate activism. Now Coke has initiated a new campaign with WWF that features its iconic advertising species in an effort to drive more funding to the international nonprofit group to “protect the polar bears’ Arctic home.”

The promotion will include new packaging for Coke over the holiday season, changing its familiar red cans to white, and featuring an image of a mother polar bear and her cubs on the side. Coke says it will donate $2 million over five years to WWF for “polar bear conservation efforts,” and will also match donations made at iCoke.ca. Last year Coke gave WWF $1.64 million for its various activities globally.

“The planet is changing very quickly, and nowhere more quickly than in the Arctic,” says Gerald Butts, president of WWF-Canada.

“I’s really important that we all understand that they need our help,” he added. “Climate change is changing livelihoods, it’s changing migration patterns for species, and we want to plan ahead. We want a future for the Arctic where the communities of people who live there are vibrant and sustainable, and the iconic species,” in particular the polar bear,  “has a long-term future on the planet.”

Read the rest at the National Legal and Policy Center.