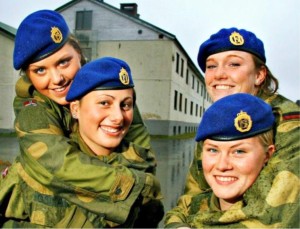 Norway’s military is taking drastic steps to ramp up its war against global warming. The Scandinavian country announced its soldiers would be put on a vegetarian diet once a week to reduce the military’s carbon footprint.

“Meatless Monday’s” has already been introduced at one of Norway’s main military bases and will soon be rolled out to others, including overseas bases. It is estimated that the new vegetarian diet will cut meat consumption by 150 tons per year.

“It’s a step to protect our climate,” military spokesman Eystein Kvarving told AFP. “The idea is to serve food that’s respectful of the environment.”