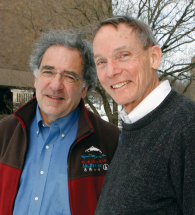 In climate-change discussions, two Princeton professors go against the grain

The issue of climate change, or global warming, has become a rallying cry: The Earthâ€™s surface temperatures are Â­rising due to increased levels of carbon dioxide and other Â­greenhouse gases in the atmosphere, much of it produced by human activity. Unless action is taken, and soon, global warming could cause crops to fail and sea levels to rise, leading to Â­widespread social disruptions and endangering many species of life on the planet. President Obama, who has renewed the American commitment to combating this problem, declared at the recent United Nations Â­climate-change conference in Copenhagen: â€œClimate change threatens us all.â€

Thatâ€™s one thing scientists agree on, right? Well, not everyone.

In some quarters, climate change has become almost a civic religion. Like any religion it has its priests â€” Al Â  Gore, perhaps â€” and its holy books â€” think Goreâ€™s An Inconvenient Truth or his more provocatively titled best-seller, Earth in the Balance. It also has its heretics â€” doubters â€” and not all of them are outside the scientific community. Even among scientists, there are a few who dispute the certainty that global warming is a looming catastrophe. Two of the most vocal dissenters are professors in the Princeton physics department: William Happer *64 and Robert Austin. Â

One personâ€™s skeptic is another personâ€™s crackpot, of course, and so climate dissenters have come in for much public abuse. Happer, the Cyrus Fogg Bracket Professor of Physics, got into a contretemps with Sen. Barbara Boxer, a California Democrat, while testifying last year before the Senate Environment and Public Works Committee. Boxer derided Happerâ€™s testimony as â€œthe most extraordinary argument I have ever heardâ€ and warned, â€œI will fight you.â€ The exchange, which ended up on YouTube, was seized upon by bloggers on both sides of the debate, many of whom added their own, decidedly ad hominem, comments.

Temperatures indeed have risen, so to speak â€” at least in the world of physics. Happer says heâ€™s been attacked verbally over the issue both inside and outside academia, including at Princeton. He claims that climate-change orthodoxy has had a chilling effect that has made some junior faculty around the country reluctant to voice support for his position out of fear of hurting their chances for tenure. Austin, however, says that in his experience, the Princeton physics department â€œhas been greatâ€ and very tolerant of climate skeptics.

In an interview last year with The Daily Princetonian, Happer characterized hostility toward climate skeptics in harsh terms. â€œThis is George Orwell,â€ he said. â€œThis is â€˜the Germans are the master race. The Jews are the scum of the earth.â€™ Itâ€™s that kind of propaganda.â€ In an e-mail following an interview for this article, he warns against â€œthe capture of U.S. societyâ€ by a â€œscientific-technological elite.â€

Although Happer credits some of his willingness to brave personal and professional criticism as an expression of his Huguenot ancestry, he adds that he has spent much of his career studying the interaction of visible and infrared radiation with gases, one of the driving forces of the greenhouse effect, which posits that CO2 in the atmosphere absorbs and redirects infrared radiation, causing temperatures to rise. Happer joined the Princeton faculty in 1980, leaving in 1991 to become director of energy research at the U.S. DepartÂ­ment of Energy, where one of his responsibilities was to supervise the departmentâ€™s work on climate change. In 1993, however, shortly after President Clinton took office, Happer testified at a House hearing that he believed that â€œthere has been some exaggerationâ€ concerning the dangers of ozone and climate change, an act of apostasy that he says led to his being replaced.

Since returning to the faculty, Happer has gained distinction for his work in other fields. He helped patent an invention that provides high-resolution images of the human lung. From 1995 to 2005, he led the University Research Board, which advises the University president on all research conducted at Princeton. He currently runs a lab in atomic physics and is chairman of the board of directors of the George C. Marshall Institute, an Arlington, Va.-based think tank founded by Frederick Seitz *34, himself a climate-change dissenter before his death in 2008.

Austin, a biophysicist, says that he had always â€œbought the party lineâ€ on climate change until he began talking to Happer. â€œIâ€™ve always known Will Happer as a guy who usually has creative and insightful things to say that are not part of the mainstream,â€ Austin explains. Happer explained his disagreements with the climate-change consensus and brought Austin around to his position. Austin has since visited the Greenland glaciers with physicist Freeman Dyson of the Institute for Advanced Study â€” another Â­climate-change skeptic â€” and says that while some glaciers may be shrinking at the edges, evidence suggests that they may be getting thicker in the middle. Â

Much of the climate-change debate centers on a 2007 statement adopted by the American Physics Society (APS), a leading professional association of physicists: â€œThe evidence is incontrovertible: Global warming is occurring. If no mitigating actions are taken, significant disruptions in the Earthâ€™s physical and ecological systems, social systems, security, and human health are likely to occur. We must reduce emissions of greenhouse gases, beginning now.â€

Austin, Happer, and a handful of other scientists urged the APS to rescind this statement in favor of one stating, â€œWhile substantial concern has been expressed that emissions may cause significant climate change, measured or reconstructed temperature records indicate that 20th- and 21st-century climate changes are neither exceptional nor persistent, and the historical and geological records show many periods warmer than today.â€ It goes on to say that other forces, such as ocean cycles and solar variability, also might account for rising temperatures. â€œCurrent climate models,â€ it concludes, â€œappear insufficiently reliable to properly account for natural and anthropogenic contributions to past climate change, much less project future climate.â€ More than 160 past and present members of the APS signed their petition, including two other Princeton faculty members: Salvatore Torquato, a professor of chemistry, and Syzmon Suckewer, a professor of mechanical and aerospace engineering.

Read the rest of this article in Princeton Alumni Weekly.