By ManBearPigHunter on August 7, 2012 in Cause/Effect, Climate History, Real Science 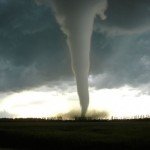 Heat and drought are punishing much of the United States right now, but there’s actually some good weather news to report. This month is on track to produce fewer tornadoes than any July on record, and by a long shot.

As of July 23, this month has produced a paltry total of 14 tornado reports, according to preliminary data from NOAA’s Storm Prediction Center (SPC). While there could be more twisters before month’s end, a major outbreak doesn’t appear likely at all.

Update (August 1): The preliminary total of U.S. tornadoes for July 2012 is 24, according to NOAA’s Harold Brooks. As noted by Climate Central, the Canadian province of Saskatchewan reported more tornadoes in July than the 48 contiguous U.S. states.

Read the rest at Atmos News

View all posts by ManBearPigHunter →
New study shows half of the global warming in the USA is artificial
Global Warming Sky Still Falling, CNN Assures

3 Responses to Summertime, and the twisters are missin'