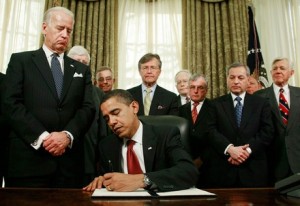 By Suzanne Goldenberg and John Vidal

The US has given up hope of reaching a global climate change treaty at Copenhagen and is working towards a deal late next year, the Obama administration said today. The decision ends hopes of a legally binding deal being sealed next month.

“We have to be honest in the process and deal with the realities that we don’t have time in these four weeks to put the language together and flesh out every crossed t and dotted i of a treaty,” said John Kerry, who chairs the Senate foreign relations committee.

Todd Stern, the state department climate change envoy, agreed. “It doesn’t look like it’s on the cards for December,” he said. “We should make progress towards a political agreement that hits each of the main elements.”

The scaling back of US ambitions follows a growing international consensus that a binding legal agreement on global warming could not be reached at Copenhagen â€“ now just 32 days away. The US shift resets expectations for what will be accomplished at Copenhagen, once billed by the UN as a last chance to avoid catastrophic global warming.

Read the rest of this story at the Guardian.

Editor’s note: The treaty isn’t dead yet, and despite this story, it, or domestic cap and trade laws could still be just around the corner. Remain vigilant. This story (and ones like it) could even be a smokescreen to throw people off guard.