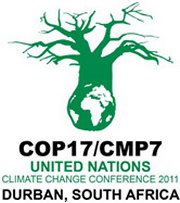 Good news. The talented strategists left the UNFCCC team before COP17 in Durban. The A-graders saw the trainwreck coming and moved on.

Everyone knows it’s a herculean task to get 190-odd countries to sign anything, and with a typical pragmatical approach the UN drafting team have gone for … not just a new “International Court” (crikey!) but rights for Mother Earth (can we be sued by a rock?), and oh boy, the holy grail, the whole kit and caboodle … we demand Peace On Earth, and a  Partridge in a Pear Tree, as Part 47a, and starting by morning tea tomorrow.

Monckton  reports that the funereal collapsing Durban talks still held the highest of ambitions. Godlike even. The real action behind the posters of parrots and pleas to save pygmy corals, or spotted limpets is the plea to make some unelected bureaucrats the totalitarian Kings of The World.

In part it’s chilling, a New International Court — which could presumably try you for crimes against coastlines, clouds, or (more likely) against endangered windfarms. Those with their hands on the legal wheel want the power to direct money (was that $1.6 Trillion?)  from the richest nations to their friends, patrons, or pet causes. If they became the anointed Kings, it would swiftly become a crime to speak doubts of climate models upon which billions of trades depends.  The darkest evil always comes cloaked with helpful intentions.

Fortunately, what’s left of the UN strategic team is even lower caliber than B-grade, beyond Z, somewhere into hexadecimal.

Ladies and Gentlemen, the grown-ups in the IPCC-support-team left the party sometime after Copenhagen, and the Z++ team are left to guard the bones. No one can take this wild ambit claim seriously.

Read the rest at JoNova.