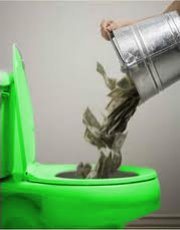 Wind farms in the Pacific Northwest — built with government subsidies and maintained with tax credits for every megawatt produced — are now getting paid to shut down as the federal agency charged with managing the region’s electricity grid says there’s an oversupply of renewable power at certain times of the year.

The problem arose during the late spring and early summer last year. Rapid snow melt filled the Columbia River Basin. The water rushed through the 31 dams run by the Bonneville Power Administration, a federal agency based in Portland, Ore., allowing for peak hydropower generation. At the very same time, the wind howled, leading to maximum wind power production.

Demand could not keep up with supply, so BPA shut down the wind farms for nearly 200 hours over 38 days.

“It’s the one system in the world where in real time, moment to moment, you have to produce as much energy as is being consumed,” BPA spokesman Doug Johnson said of the renewable energy.

Now, Bonneville is offering to compensate wind companies for half their lost revenue. The bill could reach up to $50 million a year.

The extra payout means energy users will eventually have to pay more.