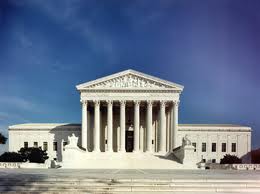 By Valerie Volcovici and Lawrence Hurley

The U.S. Supreme Court on Tuesday dealt a blow to the Obama administration when it agreed to hear a challenge to part of the U.S. Environmental Protection Agency’s first wave of regulations aimed at tackling climate change, thus setting up one of its biggest environmental cases in years.

But judges left intact the agency’s clean-car standards and its authority to regulate carbon emissions in agreeing to consider a single question of the many presented by nine different petitioners – a move hailed as a win by green groups.

The question the court will consider concerns whether the EPA correctly determined that its own decision to regulate greenhouse gas (GHG) emissions from motor vehicles automatically gave it the authority to regulate emissions from stationary sources like power plants and oil refineries.

Read the rest at Reuters.

View all posts by Dan McGrath →
Sir Bob Geldof: 'All Humans will die Before 2030'
2013 – A year with Minimal Extreme Weather Events in the US