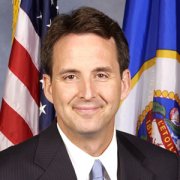 I’ve been tough (I think) in challenging former Minnesota Gov. (and now presidential candidate) Tim Pawlentyâ€‹ about his past support for cap-and-trade and policies to constrain carbon dioxide emissions. In December 2009, when he first started visiting New Hampshire, he was still talking like CO2 was pollution, and still failed to remove his state from the Midwestern Greenhouse Gas Accord.

Now he’s pretty much completed a 180-degree turnaround on the whole issue – even questioning the science of human-caused global warming, as revealed in a Miami Herald interview with him this week…

Read the rest and see the video at American Spectator.

View all posts by Dan McGrath →
Junk Science Unravels
As The Mythical Concensus Unravels, so Does Gore