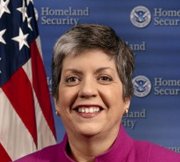 At an all-day White House conference on “environmental justice,” Homeland Security Secretary Janet Napolitano announced that her department is creating a new task force to battle the effects of climate change on domestic security operations.Speaking at the first White House Forum on Environmental Justice on Thursday, Napolitano discussed the initial findings of the department’s recently created “Climate Change and Adaptation Task Force.”

Napolitano explained that the task force was charged with “identifying and assessing the impact that climate change could have on the missions and operations of the Department of Homeland Security.”

Read the rest at CNS News.