By ManBearPigHunter on January 14, 2015 in Wind Power 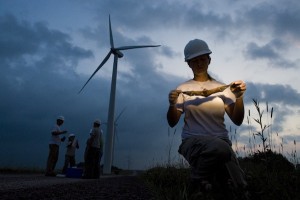 Wind turbines only last for ‘half as long as previously thought’, according to a new study. But even in their short lifespans, those turbines can do a lot of damage. Wind farms are devastating populations of rare birds and bats across the world, driving some to the point of extinction. Most environmentalists just don’t want to know. Because they’re so desperate to believe in renewable energy, they’re in a state of denial. But the evidence suggests that, this century at least, renewables pose a far greater threat to wildlife than climate change.

I’m a lecturer in biological and human sciences at Oxford university. I trained as a zoologist, I’ve worked as an environmental consultant — conducting impact assessments on projects like the Folkestone-to-London rail link — and I now teach ecology and conservation. Though I started out neutral on renewable energy, I’ve since seen the havoc wreaked on wildlife by wind power, hydro power, biofuels and tidal barrages. The environmentalists who support such projects do so for ideological reasons. What few of them have in their heads, though, is the consolation of science.