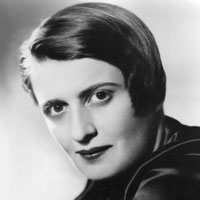 New York Times columnist Paul Krugman has come up with an exciting new theory as to why the world’s economies are still proving reluctant to bomb themselves back to the dark ages in order to “combat climate change.”  Apparently, it’s all the fault of a certain uncompromising White Russian émigré:

Well, think about global warming from the point of view of someone who grew up taking Ayn Rand seriously, believing that the untrammeled pursuit of self-interest is always good and that government is always the problem, never the solution. Along come some scientists declaring that unrestricted pursuit of self-interest will destroy the world, and that government intervention is the only answer. It doesn’t matter how market-friendly you make the proposed intervention; this is a direct challenge to the libertarian worldview. And the natural reaction is denial — angry denial. Read or watch any extended debate over climate policy and you’ll be struck by the venom, the sheer rage, of the denialists.