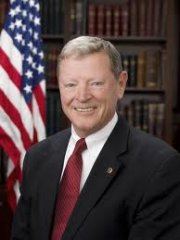 “President Obama has clearly received the message that his global warming agenda is gone, dead, done with the American people – that’s why he was touting oil and natural gas so much in his State of the Union address tonight,” Senator Inhofe said. “He understands that especially in a weak economy, Americans want the hundreds of thousands of jobs, the affordable energy prices, and the increased energy security that domestic fossil fuel development brings. But while he talks the talk, he is clearly still determined to achieve his global warming agenda by shutting down oil, gas and coal development so that energy prices will, as he said himself, ‘necessarily skyrocket.’

“President Obama congratulated himself tonight on decreasing imports of oil from the Middle East, but failed to mention that his policies of energy austerity, which have caused gasoline prices nearly to double since he took office, are responsible for it. If he is determined, as his Energy Secretary Steven Chu said, to ‘boost the price of gasoline to the levels in Europe’ he is well on his way to achieving that goal. He claims to care about energy security, yet he stopped the Keystone pipeline – and the 20,000 American jobs it would have created – which would have done more than any other project to increase our energy security and revive our economy.”

Read the rest at the US Senate Committee on Environment and Public Works.

68 Responses to Inhofe Comments on State of the Union Address