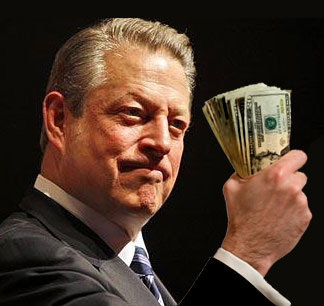 By ManBearPigHunter on January 28, 2015 in Al Gore, socialism

The World Economic Forum occurring in Davos, Switzerland, held to discuss what its participants claim are vexing problems, has already been ridiculed for the large number of private planes that it has taken to bring the elites to the conference. But that little bit of hypocrisy is nothing compared to what CityMetric reported on Thursday. Former Vice President Al Gore and former Mexican President Felipe Calderon have proposed that global warming should be dealt with by banning all automobiles in urban areas. The scheme would mean spending $90 trillion to redesign all cities to make mass transit and walking viable.

The theory is that urban sprawl has caused people to be dependent on automobiles to get around. Most automobiles use internal combustion engines to move. Internal combustion engines exude greenhouse gasses. Greenhouse gasses are inexorably raising the temperature of the Earth that, if not stopped, will cause life to become unsustainable. For this reason, we have to spend $90 trillion to gather everybody in every city into huge centralized habitats connected by rail or other transportation systems,

One suspects that giving everyone a Tesla electric car and a solar power system to recharge its batteries would accomplish the same goal. Why Gore and Calderon did not think of that is not something that has been revealed. But remember, Al Gore came within a few hundred votes in Florida of becoming president of the United States.