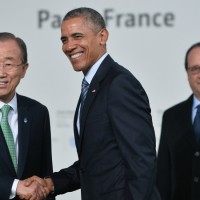 Today at United Nations Headquarters in New York City, Secretary of State John Kerry and representatives of over 130 nations will sign the Framework Convention on Climate Change agreement that was negotiated in Paris last December.

According to President Obama, this “historic agreement” will “hold every country accountable” if they fail to meet its carbon emission targets.

The White House has also acknowledged that the agreement contains “legally binding” provisions designed to create a “long-term framework” that will force the United States and signatory countries to reduce carbon emissions for decades to come.

Despite these facts, President Obama has already announced he will not submit the Paris Climate Agreement to the Senate for advice and consent. Instead, the White House claims the signature environmental achievement of the president’s tenure is just an “international agreement” not meriting Senate attention.

View all posts by ManBearPigHunter →
Climate Hustle Coming to Theaters on May 2, The Debate is Just Beginning
Jimmy Kimmel: Totally F**king Wrong on Climate Change