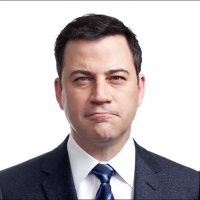 By ManBearPigHunter on May 4, 2016 in Opinion

Jimmy Kimmel is great. Probably the most relaxed, amiable, and funny of all the U.S. talk show hosts, not counting James Corden. But after last night he just lost a fan.

No, I’m sure he doesn’t care about this either. As he made perfectly clear in a segment of his show called “Scientists aren’t ****ing with you”, anyone who disagrees with “the science” on climate change is a complete wing nut – and therefore any criticism he gets from “deniers” like me will be considered a badge of honour.

Even so, if you’re going to go on TV and use your privileged late night ABC TV slot to tell millions of people about the “science” of climate change, don’t you at least owe it to your fans – especially the kids, like my daughter, who really look up to you – to make sure of your facts first?

Kimmel: “The idea that she [Sarah Palin] knows more than 97 per cent of scientists – it’s dangerous and offensive.”

No, Jimmy. What’s dangerous and offensive is for a prominent, influential celebrity to regurgitate proven lies as if they were facts. That 97 per cent claim has been debunked on numerous occasions. It was based on a skewed poll which involved a great deal of cherry-picking – and tells us nothing meaningful about either the current state of climate science or where scientists now stand on it. Even if it were remotely accurate (which it’s not by the way: it was a stunt cooked up for political reasons by activists), science is not a popularity contest. As Einstein supposedly said in response to a book commissioned by Hitler called ‘100 Authors Against Einstein’: “Why one hundred? If I were wrong, one would have been enough.”