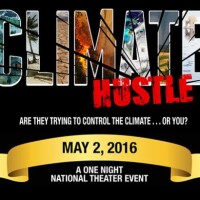 Climate Hustle produced by CFACT not only shows that Global Warming is a hoax and a scam but what’s great about Climate Hustle it shows that Global Warming is a joke. The audience was literally laughing at video clips of Al Gore and Prince Charles talking, it was almost as though they were stand up comedians. It’s like in the story of the Emperors New Clothes when the boy points out that the Emperor is naked and the crowd starts laughing.

Marc Morano is the star of the film and does a good job making us laugh as well. At one point he reenacts Al Gore’s famous elevator lift scene, sure it is a little cheesy but it totally worked in my opinion.

I think that humor is very important in a film like this, Michael Moore is an expert at it. If this movie was just charts and people talking the audience would fall asleep. Poking fun of the opposite side makes them look stupid (which isn’t hard to do) plus it makes people let down their guard and they become more open minded.

Don’t get me wrong this movie is not a comedy it also has a lot of good information. Marc interviews climate scientists who used to believe in Global Warming but don’t anymore and how hard it’s been on their careers especially Judith Curry, her story is quite compelling.

The movie is coming to Minnesota for one night only so make sure you don’t miss it.

It will be in these theaters in Minnesota.

You can search and buy your tickets here.

View all posts by ManBearPigHunter →
‘Climate Hustle’ goes to DC: Skeptical film to premiere on Capitol Hill
Obama’s Violating the Constitution by Not Submitting Climate Treaty to Senate

105 Responses to Climate Hustle Coming to Theaters on May 2, The Debate is Just Beginning