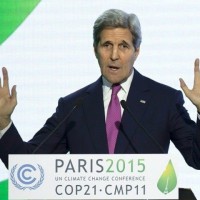 It’s 40 seconds that should turn the global warming world upside down.

Secretary of State John Kerry made an astounding confession today at the COP-21 climate conference in Paris: Emissions cuts by the U.S. and other industrialized nations will make no difference to global climate, he said.

… The fact is that even if every American citizen biked to work, carpooled to school, used only solar panels to power their homes, if we each planted a dozen trees, if we somehow eliminated all of our domestic greenhouse gas emissions, guess what – that still wouldn’t be enough to offset the carbon pollution coming from the rest of the world.

This is the first time such a senior government official has admitted the utter futility of American carbon dioxide emissions cuts. That’s a consequential admission even if you believe the claims of climate alarmists about the danger of emissions.

The admission should have legal as well as political consequences. In the 2007 Supreme Court decision giving EPA authority to regulate greenhouse gases, the Supreme Court was careful to note that, although EPA couldn’t solve the global warming problem all at once or by itself, it was allowed to make incremental progress on the problem. Kerry’s admission shows that the U.S. government knows that such progress is simply not possible.

This admission should find its way into the ongoing litigation of EPA power plant rules and it should blow them up.

20 Responses to Why Bother? John Kerry Admits American CO2 Cuts Would Be Pointless