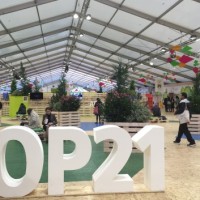 (France, Le Bourget) French Foreign Minister and COP 21 President Laurent Fabius, a Socialist, released this afternoon a substantially slimmed down draft of the final outcome of the UN international climate summit. You can read it at CFACT.org. He stated that he is “confident” the UN will achieve a final deal this week.

It is unclear, with the document emerging from behind closed door sessions, to what extent this version enjoys wide support among COP 21’s various factions. Speculation is widespread that Fabius is using his powers as President of the COP to pare down the text with an eye toward satisfying requests by President Obama’s negotiating team to provide the U.S. with a largely non-binding document it can use to try and avoid Senate ratification.

If you’ve been following CFACT’s reporting on this process, you will recall that an earlier, slimmed down version in Bonn quickly sinlked back up when parties with special interests demanded that their pet provisions be put back in.

With only two days left in the official timetable to finalize the agreement, the challenge to reach a decision on the many remaining options is daunting. COPs routinely go into extra innings, don’t be surprised if there is last minute drama this time.

The present draft strips out some of the more frightening provisions seen in earlier versions, such as an “International Tribunal of Climate Justice,” and replaces them with more benign sounding provisions, in this case, implementation “mechanism.”

The draft is riddled with unique UN double-speak and politically correct provisions, such as the insistence that any climate agreement must be “gender sensitive,” “sustainable,” and “responsive.

View all posts by ManBearPigHunter →
New Report: The Truth About China
Why Bother? John Kerry Admits American CO2 Cuts Would Be Pointless