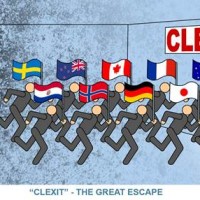 By ManBearPigHunter on August 2, 2016 in Clexit, Opinion

Harmful, Costly, Unscientific Climate Treaties should be torn up

A new international organization aims to prevent ratification of the costly and dangerous Paris global warming treaty which is being promoted by the EU and the present US administration.
“CLEXIT” (CLimate Exit) was inspired by the Brexit decision of the British people to withdraw from the increasingly dictatorial grasp of the EU bureaucracy.

Without any publicity or serious recruiting, Clexit has attracted over 60 well-informed science, business and economic leaders from 16 countries.
The secretary of Clexit, Mr Viv Forbes from Australia, said that widespread enforcement of the Paris climate treaty would be a global tragedy.

“For the EU and the rest of the Western world, ratification and enforcement of the Paris Treaty (and all the other associated decrees and Agendas) would herald the end of low-cost hydrocarbon transport and electricity, and the exit of their manufacturing, processing and refining industries to countries with low-cost energy.
“For developing countries, the Paris Treaty would deny them the benefits of reliable low-cost hydrocarbon energy, compelling them to rely on biomass heating and costly weather-dependent and unreliable power supplies, thus prolonging and increasing their dependency on international handouts. They will soon resent being told to remain forever in an energy-deprived wind/solar/wood/bicycle economy.
“Perhaps the most insidious feature of the UN climate plan is the “Green Climate Fund”. Under this scheme, selected nations (“The rich”) are marked to pour billions of dollars into a green slush fund. The funds will then be used to bribe other countries (“developing and emerging nations”) into adopting silly green energy policies.
“Naturally some smart politicians and speculators in the BRICS nations (Brazil, Russia, India, China and South Africa) and in the small island nations, understand that they can profit from the Paris Treaty by gaming the rules on things like carbon credits, or milking the green fund for “climate compensation” or “green energy technology”. This will only work for a while, and when the handouts stop, the re-adjustment to reality will be very painful.
“This UN-driven war on carbon energy has already caused massive losses and dislocation of western industry. If allowed to continue as envisaged by the Paris Treaty, this economic recession will become a world-wide depression, and all nations will suffer.
“We must stop this futile waste of community savings; cease the destruction and dislocation of human industry; stop killing rare bats and birds with wind turbine blades and solar/thermal sizzlers; stop pelletising trees and shipping them across the world to feed power stations designed to burn coal; stop converting food to motor vehicle fuel; and stop the clearing of bush and forests for biofuel cultivation and plantations.”
“Carbon dioxide does not control the climate. It is an essential plant food and more carbon dioxide will produce more plant growth and a greener globe.”

Here is the pdf

One Response to After Brexit, Clexit