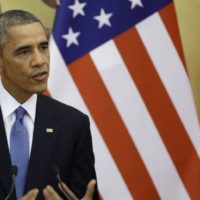 By Michael Bastasch, The Daily Caller
The U.S. and China will formally join the United Nations global warming agreement while President Barack Obama makes his final trip to Asia for the G20 meeting in September, sources tell the South China Morning Post.

U.S. and Chinese officials said an announcement will likely be made Sept. 2, about two days before Obama meets with President Xi Jinping at the G20 summit in Hangzhou, sources told the Post.

If true, Obama will have ratified a major international agreement without Senate approval. Obama clearly hopes U.S. and Chinese ratification of the deal will help it come into force earlier than anticipated, making it politically harder for a future president to undo.

“There are still some uncertainties from the US side due to the complicated US system in ratifying such a treaty, but the announcement is still quite likely to be ready by Sept 2,” a source with knowledge of the announcement told the Post.