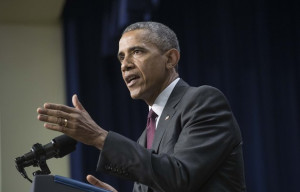 US President Barack Obama addresses an event with entrepreneurs from across the United States and around the world to highlight the importance of investing in women and young entrepreneurs to create innovative solutions to some of the worlds challenges, including poverty, climate change, extremism, as well as access to education and healthcare at the White House in Washington, DC, on May 11, 2015. AFP PHOTO/NICHOLAS KAMM (Photo credit should read NICHOLAS KAMM/AFP/Getty Images)

The science on global warming is settled, so settled that 20 climate scientists are asking President Barack Obama to prosecute people who disagree with them on the science behind man-made global warming.

Scientists from several universities and research centers even asked Obama to use the Racketeer Influenced and Corrupt Organizations Act (RICO) to prosecute groups that “have knowingly deceived the American people about the risks of climate change, as a means to forestall America’s response to climate change.”

RICO was a law designed to take down organized crime syndicates, but scientists now want it to be used against scientists, activists and organizations that voice their disagreement with the so-called “consensus” on global warming.