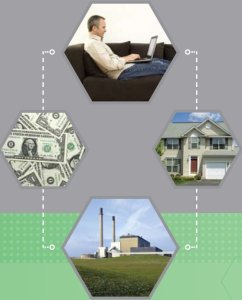 Why “Smart Grid” Technology is Dumb

By William Yeatman and Jeremy Lott

America is a beacon of capitalism, so it can be jarring to discover one of its largest industries is a redoubt of socialism. State governments have been running the electricity business, currently a $330-billion-a-year industry, since Theodore Roosevelt pounded his White House bully pulpit.

Central planning of the electricity industry started during the Progressive Era, as is the case with many misguided policies. Early in the 20th century, intervention-minded progressives, such as Wisconsin’s Robert “Fighting Bob” La Follette, concluded that electric companies would consolidate into “natural” monopolies that preyed on consumers. This was a curious conclusion to reach at a time when electric companies were competing vigorously in many cities.

Their remedy for this theoretical drift toward natural monopoly was, incredibly, to establish real government-mandated monopolies. States created commissions with the regulatory power to outlaw competition among utilities and set the price of electricity for consumers. By the end of the Great Depression, almost all Americans bought their electricity from government-backed monopolies, and it remains so to this day.

The progressives reasoned that electricity providers couldn’t abuse consumers if they labored under the state’s thumb, but it’s far from that simple. Without competition, there is no spur for innovation, which is why electricity transmission and distribution–the system of wires, towers and poles that transmits electricity from the power plant to your home–haven’t changed much since the regulators stepped in.

That’s unfortunate, because while the power system remains frozen in time, American society as a whole has changed dramatically. The U.S. has become a wired nation, a people wholly dependent on reliable electricity to power their computers, phones and iPods. And America’s anachronistic electricity supply chain is failing to keep pace with demand. Massive blackouts in California (2005), Florida (2008) and the entire Northeast (2003) serve as stark reminders of the fragility of the U.S. grid.

Congress wants to overhaul the system by spending a king’s ransom on technologies that would give utilities the ability to moderate consumer demand–by, say, remotely turning down millions of thermostats during periods of peak use. In theory, this might avoid the supply crunches that can stress the system to the breaking point, leading to blackouts. Proponents call this a “smart grid” approach, but it’s really a stupid policy, especially when the U.S. could modernize the system without spending a penny from the government treasury.

Read the rest of this story at Forbes.