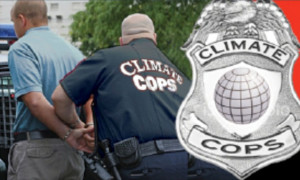 China is getting serious about protecting the environment and expects its citizens to follow suit — or pay the price. China’s Environment Minister Chen Jining told parliament on Monday that Chinese police arrested thousands of people suspected of committing environmental crimes in the last year. Jining reported that, in total, 2,080 criminal cases were handed over to the police by environmental protection departments in 2014. Moreover, an estimated 3,400 companies and 3,700 construction sites were found to have violated environmental laws last year, and more than 3,100 workshops had to be shut down because of violations.

Read the rest at The Week.