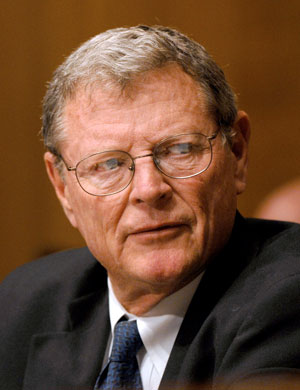 By ManBearPigHunter on January 22, 2015 in Opinion

Yesterday the Senate voted 98 to 1 that “Climate Change” is not a hoax, in my opinion they missed out on a huge opportunity to save America’s economy.

All of our energy policies are based on the hoax of climate change, from mileage standards and wind energy to light bulbs. Normally these things would be regulated by the market but because of the the threat of climate change they are now regulated by the government. We finally have a Republican majority in the Senate and most of the them are Global Warming Skeptics and if they would have voted in unison that global warming is a hoax we could have started dialing back the clock on some of these policies.

I think Senator Inhofe and the rest were afraid of ridicule for saying they don’t believe in climate change because everyone knows that the climate changes it’s just that man has nothing to do with it. I think by doing this they were being a little too clever and missed out on a chance to actually have a debate on the issue.

Every time the phrase “Climate Change” is used in legislation it stands for “Man-made Catastrophic Climate Change” which almost everyone agrees isn’t happening but it used an excuse to tax and regulate every aspect of human existence.

The lone no vote came from Senator Roger Wicker (R–MS) who was the only one brave enough to say the Emperor is naked.