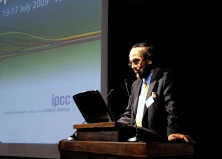 If this keeps up, no one’s going to trust any scientists.

The global-warming establishment took a body blow this week, as the UN Intergovernmental Panel on Climate Change received a stunning rebuke from a top-notch independent investigation.

For two decades, the IPCC has spearheaded efforts to convince the world’s governments that man-made carbon emissions pose a threat to the global temperature equilibrium — and to civilization itself. IPCC reports, collated from the work of hundreds of climate scientists and bureaucrats, are widely cited as evidence for the urgent need for drastic action to “save the planet.”

But the prestigious InterAcademy Council, an independent association of “the best scientists and engineers worldwide” (as the group’s own Web site puts it) formed in 2000 to give “high-quality advice to international bodies,” has finished a thorough review of IPCC practices — and found them badly wanting.

Read the rest of this story at the New York Post.