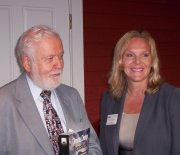 A tornado touchdown in Minneapolis and driving rains threatened to waylay the Symposium on Climate Change organized by the Free Market Institute on Wednesday.

Fortunately, no one was ushered into the storm shelters at the Earle Brown Heritage Center and the storm quickly passed allowing the presentation to go on as planned.

Because of the controversial nature of the climate change debate, managers at the Earle Brown Center took the precaution of staffing security at the event, but aside from a brief misunderstanding about a yellow feather-suit being donned in a restroom, there was no threat of anarchy. Minnesotans for Global Warmingâ€™s exhibit included a man in a Chicken Little costume, who security officer Larry Deiman initially mistook for a potentially disruptive protestor. The half-dressed Chicken Little quickly explained himself and got to work in the hall announcing his trademark alarm, â€œthe sky is falling!â€

Dr. Fred Singer, author of Unstoppable Global Warming: Every 1,500 Years kicked off the event with a detailed debunking of several popular climate science misconceptions and a thorough analysis of problems with several IPCC reports.

State Senator Jungbauer explained the state of arctic ice, the nature of sea level rise and Greenlandâ€™s ice cover in a breakout session.

There were several other national and local climate experts making presentations, including Dr. Pekarek from St. Cloud University.

About 300 people attended the event. The Minnesota Taxpayers League, Minnesotans for Global Warming and Minnesota Majority maintained information booths there.

For some, the symposium was a refresher course in skepticism of man-made (anthropogenic) global warming. For others it was an eye-opener. â€œI came here with an open mind,â€ said one attendee, who stopped at the Minnesota Majority / GlobalClimateScam.com booth, â€œI didnâ€™t really know what to think [about global warming]. A lot of the things I heard here, Iâ€™d never heard before,â€ she said.

Update: Video from the Symposium is now available.

Writer, Activist, Pilot, Communications Expert, Jack of all Trades. Websites: https://www.DanMcGrath.net | https://www.DanandTina.net
View all posts by Dan McGrath →
Policy Peril
Waxmanâ€“Markeyâ€™s Gravy Train: Why the Electric Industry Got on Board (Getting favors, adding pages to H.R. 2454)