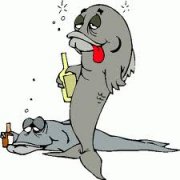 Carbon dioxide in the ocean acts like alcohol on fish, leaving them less able to judge risks and prone to losing their senses. The intoxication adds to the threats that global warming and ocean acidification pose to marine ecosystems.

Around 2.3 billion tonnes of human-caused CO2 emissions dissolve into the world’s oceans every year,turning the water more acidic.

Philip Munday and colleagues at James Cook University in Townsville, Queensland, Australia, have previously found that if you put reef fish into water with more CO2 than normal in it – similar to the levels expected in oceans by the end of the century – they become bolder and attracted to odours they would normally avoid, including those of predators and unfavourable habitats.

Read the rest at New Scientist.