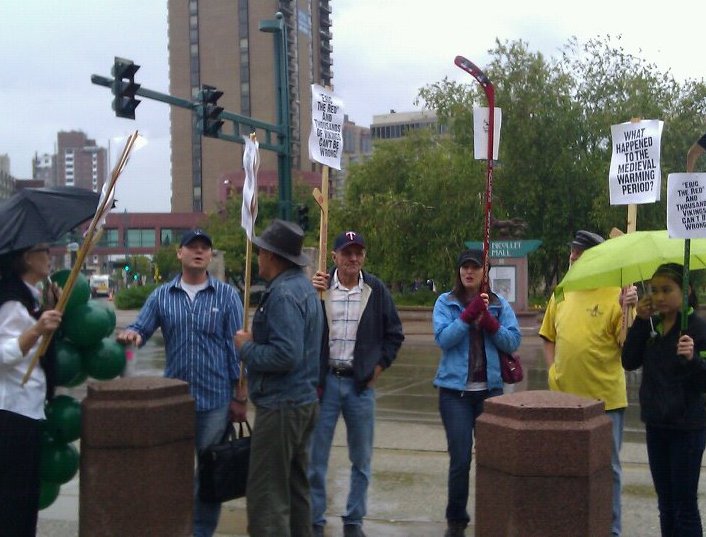 Dr. Michael Mann was welcomed to Minneapolis today by a group of demonstrators who blame Dr. Mann’s research and publications for damage to the US and world economies and fostering distrust in scientists. The demonstrators believe Mann’s oft-referenced work to prove anthropogenic global warming theory is fraudulent and showed up at the Minneapolis convention center where he was speaking at the annual meeting of the Geological Society of America to tell him so.

Mann was made infamous by discredited tree ring research used to create the so-called “hockey stick chart” that purported to demonstrate recent, runaway man-caused global warming. His name came up in the “climategate” email scandal that emerged out of the Climatic Research Unit at East Anglia University, in connection to a “trick” employed by Dr. Mann for a paper published in Nature Magazine. That trick involved obfuscating the results of proxy temperature data when it didn’t match actual temperatures recorded by instrumentation. Discovery of that trick called into question the validity of the entire pre-instrumentation climate history constructed from Mann’s work.

The hockey stick chart was the key element in Al Gore’s “An Inconvenient Truth” and the United Nations’ 1997 Intergovernmental Panel of Climate Change’s 4th Assessment. The IPCC report has been the underpinning of United States and global warming policy for over a decade. Based upon it’s conclusions, governments have implemented expensive carbon taxes and new overbearing regulations designed to reduce carbon dioxide emissions, cap and trade schemes, a phased-in ban on incandescent light bulbs, the forced relocation of whole populations of people to make room for carbon credit producing plantations and numerous other far reaching and expensive initiatives.

“There are several reasons for the current economic crisis we’re facing in the United States and globally, but a major contributor has been the suppression of energy production and economic activity by overbearing new regulations, taxes and carbon trading resulting from the misguided belief that anthropogenic carbon dioxide emissions are causing extraordinary warming of the planet,” said Minnesota Majority president Jeff Davis. “We feel Dr. Mann’s work has contributed to tremendous economic and societal harm,” he said.

“Where did the medieval warming period go? What decline did he hide? What’s the Nature trick?” are the questions Minnesota Free Market Institute president Kim Crockett wants answers to.