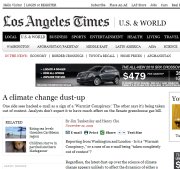 That thumping sound you hear is the Los Angeles Times moving the goal posts in the global warming debate.

On November 22, while responding to the growing scandal about alleged proof that global warming is a hoax, the Times brushed it off with a puzzling claim that science should have no bearing on climate legislation.

What a difference a few leaked e-mail messages could make: just over a month ago, the exact same paper had insisted science was behind the push for regulation. Now with the validity of that science in doubt, the Times was quick to find a different angle.

In an article titled “A Climate Change Dust-up,” writers Jim Tankersley and Henry Chu began with reassurance that the scandal was nothing to fear because the hacked e-mail messages would not make a difference either way:

Is it a “Warmist Conspiracy,” or a case of an email being “taken completely out of context”?

Regardless, the latest dust-up over the science of climate change appears unlikely to affect the dynamics of either a pending debate in the Senate or international climate negotiations in Copenhagen next month.

The whole point of the meeting in Copenhagen has been to limit pollution that supposedly destroys the planet based on evidence gathered and purported by researchers specifically involved in the email scandal. If the very premise of global warming has possibly been exposed as a fraud, why would that not be of interest to those who want to legislate global warming?

Because, according to the Times, the fight to stop possibly nonexistent global warming would be about saving the economy:

But advocates of action to curb global warming dismiss those claims, and political leaders and analysts say the Senate bill to limit greenhouse gas emissions will sink or swim based on economics, not science.

“The scientists are going to fight about this for decades,” said Robert Dillon, a spokesman for Sen. Lisa Murkowski of Alaska, one of several Senate Republicans who say they are open to some form of a climate bill. “We should be doing something to curb our emissions that would not harm the economy, and would in fact boost the economy,” he said.

So the Times believed in doing something about emissions whether or not we knew that they were harmful. It was suddenly okay for the science to remain unsettled, and in fact, the Senate was encouraged to limit greenhouse gases even if science was unable to prove a connection between carbon dioxide emissions and temperature.

But if the entire logic of this effort to save the economy was based on the hope that green jobs would put Americans to work, someone should have told the Times that President Obama has already been funding green jobs without a climate bill.

Equally preposterous, nowhere did the article explain exactly how limiting a company’s carbon dioxide output would cause it to expand payrolls.

Not to worry, for according to global warming activists it would all work with or without the data to back it up.

Read the rest of this article at Newsbusters.