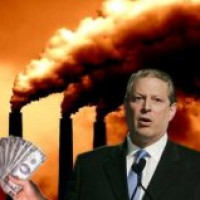 By Dan McGrath on May 2, 2008 in Global Cooling, Global Warming ‘Solutions’, Junk Science

Can global warmingâ€™s vested interests close the deal on greenhouse gas regulation before the public wises up to their scam? By Steven Milloy A new study indicates alarmist concern and a need to explain away the lack of actual global warming. Researchers belonging to the U.N. Intergovernmental Panel on Climate Change, or IPCC, reported in […]

By Dennis AveryÂ  Now itâ€™s not just the sunspots that predict a 23-year global cooling. The new Jason oceanographic satellite shows that 2007 was a â€œcoolâ€ La Nina yearâ€”but Jason also says something more important is at work: The much larger and more persistent Pacific Decadal Oscillation (PDO) has turned into its cool phase, telling […]

By Dan McGrath on May 1, 2008 in Economics, Extremists, Junk Science, Misguided Leaders

Chad Johnson has had enough of global warming hysteria shaping public policy and he wrote a letter to his state senator that has since been passed around to other legislators. His letter expresses the frustration of ordinary citizens. With Mr. Johnson’s permission, a portion of his correspondence is reproduced below. Senator, I appreciate your political […]

The allegedly warming earth is in for about 30 years of cooling according to NASA, one of the leading global warming theory advocates. NASA has confirmed that a developing natural climate pattern will likely result in much colder temperatures, according to Marc Shepherd, writing in the April 30 American Thinker. He adds that NASA was […]